Gaslighting 101: Are You Being Manipulated at Work?

February 21, 2019
Your boss promises you a raise in return for a huge project. But once you hit “send,” nothing comes your way. Worse, when you confront him, he blames you.
Instead of apologizing, or even discussing it further, he plays the victim.

“Why are you going crazy on me? Don’t you see how hard I’m working?” he snaps.

Suddenly, you’re the one apologizing. Nobody likes to be called crazy (more reasons not to do that on Bustle). But since we can’t stir up an HR storm for every conflict, we explain it away: Everyone says things they regret. And (sigh) maybe we did overreact.

These moments are subtle, but they’re more harmful than you think. And they have a name: gaslighting, where people use lies, false promises, and personal attacks to make you question your memory, sanity…basically everything.

Gaslighters manipulate to control you—once you begin doubting your own instincts, you’re more likely to believe whatever you’re told, starting a vicious cycle of manipulation, denial, and more manipulation. That’s the biggest problem. The longer it goes on, the less likely you are to stop it. Eventually, you feel like maybe, just maybe, you really are the crazy one.
More of a visual learner? Here's a video to help:

signs you're being gaslighted

The first step in stopping gaslighting is to recognize it. So what does it look like? Though no two situations are the same, Psychology Today shares some common red flags:

Your boss tells you one thing on Monday and the exact opposite on Tuesday. What should you believe? You don’t know, and that’s the point. If you’re confused, you’re easier to control.

2. They Deny Making A Promise, Even When You Have Proof

Similarly, gaslighters use promises to extract time or work from you, only to renege once it’s time for them to pay up. By denying the promise in the first place, they get out of their obligation and make you doubt your version of events.

3. If You Challenge Them, They Lash Out At You

“You’re being so irrational!” “Don’t you think you’re overreacting?” With these responses, the gaslighter not only dismisses your emotions, but deflects their own responsibility for their behavior. Beyond that, they make you feel crazy for even speaking up, making it more likely that you’ll let it slide in the future.

4. They Throw In Just Enough Positive Reinforcement To Confuse You

If you were constantly criticized, with no compliments balancing out the crap, you’d just quit, right? Gaslighters realize that everyone has their breaking point, so they’ll string you along. The moment you’ve had enough of their treatment, they’ll pepper in just enough praise to keep you from leaving them. So if you think you're being gaslighted, what can you do?

How To Face Gaslighting And Win

1. Educate Yourself On Gaslighting

It’s hard not to take the insults personally. Realize that gaslighters are the ones with the problem, though. They’re trying to manipulate you, typically to regain control of their own lives or boost their bad self-esteem. Certainly, there’s no excusing pathological behavior. But once you view their actions from that perspective, you’ll be able to take their treatment less personally and regain some power in the relationship.

2. Get Some Outside Advice

Because gaslighting clouds your own perception of the situation, confide in your family and friends for a more objective reading of what’s going on.

3. Reconnect With Your Intuition

To recover from gaslighting, you need to stand up for yourself and your emotions. But first, you need to remember what and how you feel. Victims of prolonged gaslighting often stop listening to their own voice because when they’re always criticized, what’s the point, right?

Try journaling or meditating to rekindle your inner voice. With more awareness of your emotions, you’ll be better prepared to fight for them.

Since gaslighters respond to criticism with personal attacks, they’ll feel threatened by any direct challenge and retaliate. They may even accuse you of gaslighting them. So as much as you can, try to avoid contact. Instead, consult HR for strategies on minimizing your time with them. After all, that’s what they’re paid for!

But when you have to engage with a gaslighter, write down exactly what happened. Describe what happened, when it happened, and how it made you feel. By putting it on paper, you’re taking the time to process—and validate—your own emotions, which will help you resist the manipulation. Also, the next time you’re questioning your sanity, you can read those past incidents to get the record straight.

Bonus: If the situation escalates to HR, you’ll be able to support your case with documentation of specific events.

6. Consciously Affirm Your Self

In your log, always follow up your entries with a personal affirmation: “I am valued,” “I am worthy,” “I am loved.” Even if you have to fake it at first, it’ll help you repair your self-worth after a gaslighting incident.

7. Prepare For A Struggle—And Leave If You Have To

Gaslighters thrive off of our desire for approval and fear of abandonment. And as much as they piss you off, you try to please them and fear their rejection. So prepare to second-guess yourself as you break away from their web.

And if necessary, leave your job. Your sanity and self-worth are worth more than a salary or someone else’s approval. 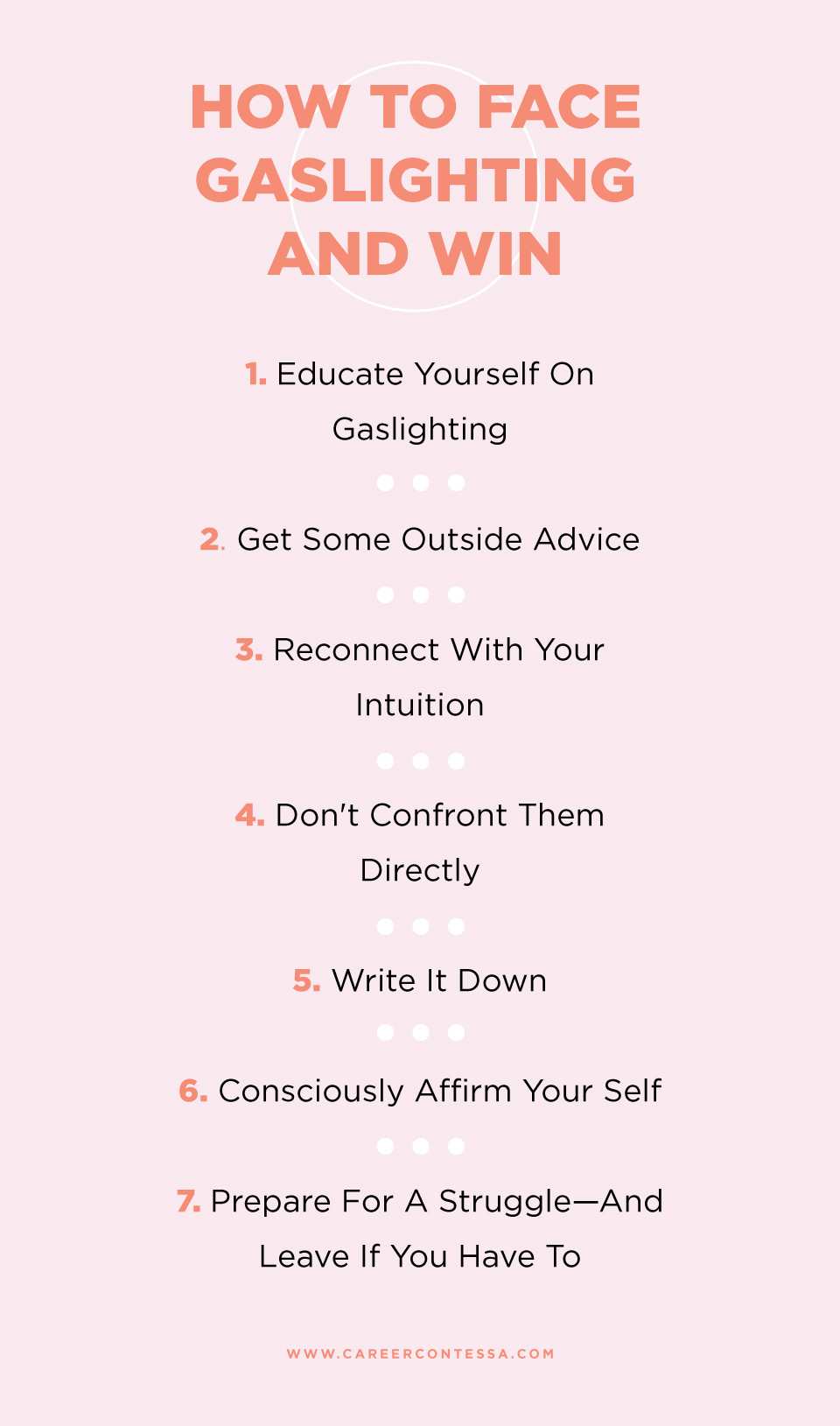 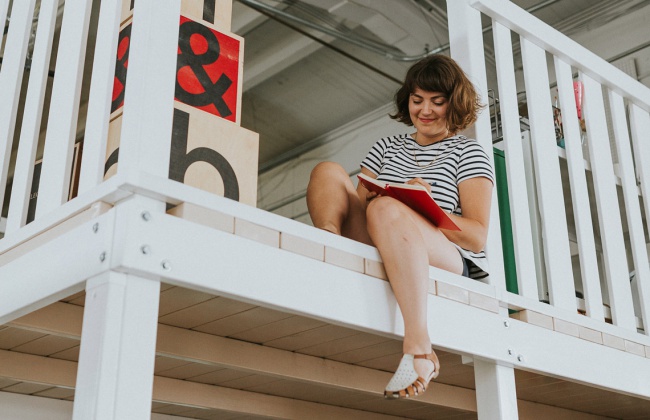 How Keeping a Vision Journal Can Change Your Career 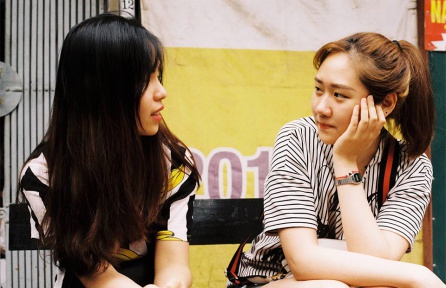 The Un-Importance of Being Liked at Work 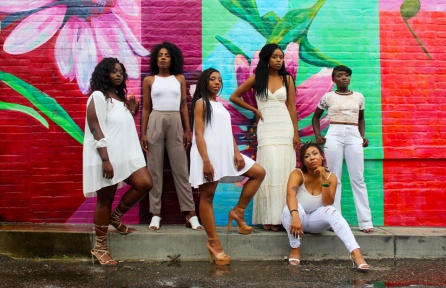 1
How Keeping a Vision Journal Can Change Your Career
2
The Un-Importance of Being Liked at Work
3
Black History Month Roundup—Our Favorite Content from Black Women
4
13 Ways to Treat Your Galentine This Year
5
What’s New on The Femails This Season
6
How to Establish Healthy Boundaries at Work
7
Could a Voluntary Demotion Be The Best Thing For Your Career?